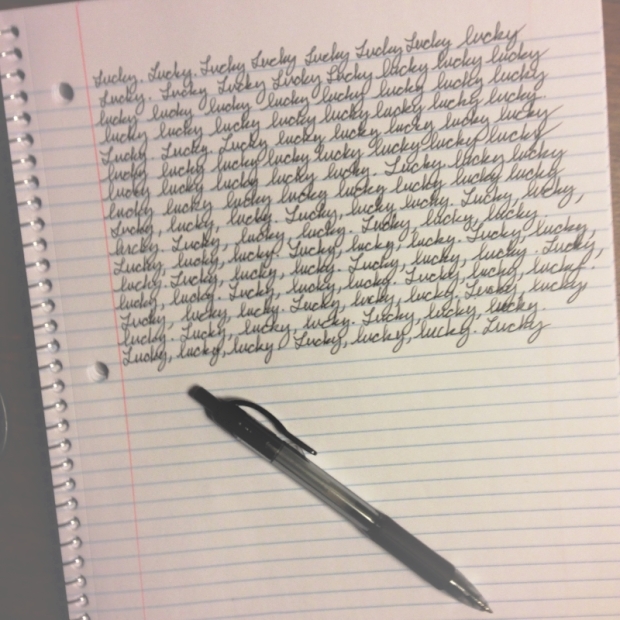 Then it needs to be recharged.

At first I thought that was terrible. Six minutes!

Then I realized it meant I’d never be vacuuming for more than six minutes.

That makes it a lot easier to grab the Dyson when something needs to be done.

And if something needs to be vacuumed up, I can always spare six minutes.

One reason people don’t keep up with doing their alignment work daily is, it can feel like too much of a time commitment.

But what if there were a six-minute maximum?

Well, for the purpose of this article I just set a timer for six minutes and began writing the word Lucky. I filled nearly half a page.

It was a lot more fun than vacuuming.

Before, I would pull out a notebook and write down appreciations, do a focus wheel (with a circle in the middle and the 12 spokes), and play with the alphabet game. I usually worked with process when I was wanting to feel better about something. I kept telling myself that I’d write everyday

Really the only process I did prior to this was appreciations and occasionally “what if.”

I really enjoyed doing the processes [during this program]. I had read about the focus wheel, but had found it rather confusing. I liked the way Teresa presented it and found it to be really helpful in moving energy.

I loved your program. I love the work you are doing. Your attention to detail was impressive. It showed in your feedback and also when I had a question about formatting you were right on it and very helpful.